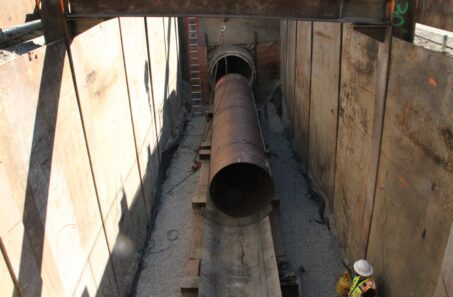 The San Luis Rey Pipelines Relining Project rehabilitated portions of three pipelines  near the San Luis Rey River, extending the service life of the pipelines by 75 years. The project was completed in 2015 and allowed Caltrans to be able to widen and realign State Route 76 over the pipelines.

During construction, the pipe was accessed by excavating a 25 by 40 wide portal. Once excavated, the existing pipe was accessed and relining materials, including steel liners, were installed. The excavated sites, called portals, were surrounded by temporary large wooden sound walls to ease noise impacts to residents, comply with environmental regulations, and for security and safety precautions.

Construction crews conducted most of the work underground, inside the pipe, and the work did not interrupt water service to nearby homes and businesses.

This project was completed in 2015.